Camping Out as a Protest 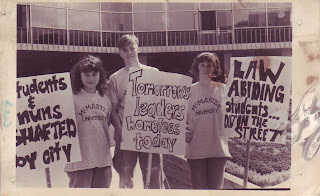 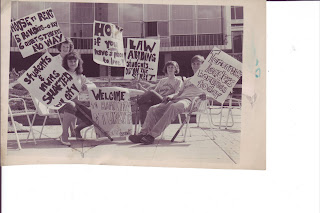 I don't know why it took my old brain to remember that I once camped out as a protest. So I went to the basement looking for proof and found these two beauties.

It was 1988. The City of Hamilton passed a bylaw that no more than 5 or 6 (again can't remember) unrelated people could live together. I was Student Union President. We protested by camping out over night. We had tents although the pictures don't show it (they just show the law chairs). Early that day or the next I was interviewed on Metro Morning on Jarvis Street with Joe Cote. Yes, that's how old I am, before the Mothership, before Andy Barrie, well, before Matt Galloway too I suppose.

We would have said that the camping was the protest.

Fraser Advocacy
Toronto, Ontario, Canada
T: 416.703.9555 31 Prince Arthur Avenue, Toronto ON M5R 1B2 Fraser Advocacy is a public interest law practice committed to social justice with an emphasis on mental health, children’s rights and human rights. Please note that any email correspondence to contact the firm is informational only. You will not be considered a client of the firm until we have agreed to act for you in accordance with our usual policies for accepting clients. The content of this website is provided for informational purposes only and should not be construed as legal advice.